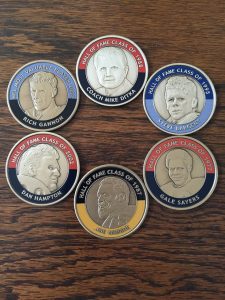 Congrats to Robert Gagno (Again!).  Robert was the winner of the FFC “Black Tie” Slot Machine Giveaway!  This brings his 3 year total of accumulation of prizes won, either by skill or draw, to include … A New Stern Mustang pinball, Wild Africa Slot Machine, Gottlieb Spin A Card pinball, and now a Black Tie Casino Slot Machine!  Robert was also awarded an Invite to the FWTG Cooper’stown Final Pinball Showdown… See you there Robert!

The next FFC giveaway will be for a Limited Edition set of 6 Gridiron Greats Star Series Medallions.

In addition to the Star Series Medallions, the next week’s drawing (Thursday December 1st 8 PM CST) will include an Invitation to the Cooper’stown Final Pinball Party.

Additional upcoming prizes to be awarded randomly to FFC Members include-

A quick reminder – There are TWO components of the Flippin’ With the Greats Campaign… Details at www.gridironsupport.org

1) The “Fantasy Football Club” – A club where Pinball Enthusiasts can support their favorite NFL teams (and win GREAT Stuff!) by simply buying and Creating a PERSONALIZED IFPA/FWTG Medallion to include the player’s name, IFPA #, and the NFL Team they support. Great prizes will be distributed to Club Members throughout the season. Click HERE for more details.

2) The TOURNAMENT SERIES – A Nationwide series of tournaments to be scheduled throughout the NFL season culminating in the SUPER BOWL Pinball Party at Alice Cooper’stown in Phoenix, AZ. Click HERE for more details.

Be sure to join the 2016 IFPA FWTG Series (Group) on Facebook. For more up to the minute information Click HERE

The Gridiron Greats Assistance Fund (GGAF) is a non-stock, non-profit 501(c)3 organization, providing financial grants and “pro bono” medical assistance to retired NFL players in dire need. The organization focuses on the humanitarian side of post-football related issues, which include coordination of social services to retired players who are in need due to a variety of reasons including inadequate disability and/or pensions. Learn more at www.gridirongreats.org

Alice Cooper’s Solid Rock is a non-profit 501(c)3 organization, also. Solid Rock’s primary mission is to make an everlasting difference in the lives of teens by helping them meet their spiritual, economical, physical, and social need. Alice Cooper’s Rock Teen Center offers a safe, engaging environment during non-school hours –a time when they are most vulnerable to drugs, violence, and gangs. Maintaining a teen’s worst enemy is too much time on their hands Solid Rock provides the music, arts, vocational programs and fellowship that challenge teens to discover their passion through music, dance, self-expression, and creativity. Learn more at www.alicecoopersolidrock.com.