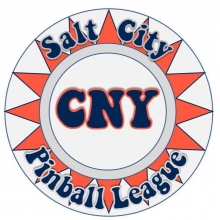 16. League Fund Policy
a. The term “League Fund” can also be used for any “CNY Pinball” fundraising events, as well as the League Nights mentioned in this document.
b. A League Fund will be created to raise money for numerous local pinball causes, as well as auditing and transparency purposes.
c. Jason Plourde has volunteered to be the League Treasurer, and will be keeping track of all monies taken in and spent throughout the season.
d. Money will be spent on items such as trophies, magnets, stickers, raffle tickets, promotional materials, and any party favors purchased for League Nights, including the Finals in December.
e. Speaking of raffle tickets, 50/50 raffle! 50/50 raffles will now be run at most league nights.
i. Full details of pricing for raffle tickets will be forthcoming, but the most common method will be $2 per ticket, $5 for 3 tickets, or $10 for 10 tickets
ii. A person who has not purchased a ticket will be asked to volunteer to pick the winning ticket out of the bowl/hat/whatever.
iii. 50% of the full amount of tickets purchased will go to the “League Fund” and the other 50% will go to the winner of the drawing.


Finals (6th League Night)
17. TBA (Tentatively targeted for Friday, December 15th but subject to change based on host availability)
18. Evening will be split into 2 groups. Top 6 Finals in one group for “A” Division, and the next 12 players (positions 7-18 in the standings) in the other group for “B” Division.
19. Top 6 Final
a. Only to include the 6 highest ranked players in attendance. Every effort will be made in the weeks leading to Finals to make sure we have a set field of 6 players.
b. The first tiebreaker in standings will be number of League Night 1st places in the season. If any players ranked 1-6 are still tied after that, a 1 game playoff before Final League Night begins will take place. Coin flip will decide who chooses game, and order, for the tiebreaker game.
c. All matchups will be best of 5, head to head match play, and higher seed picks all games. Higher seed also gets choice of order for the first game, and then the loser chooses order thereafter. #1 and #2 seeds will receive byes into Semi-finals. 3rd place will be playing 6th place and 4th place will be playing 5th place in round 1. #1 seed plays lowest place participant remaining. This competition will decide the League’s final standings 1-6.
d. At the end of each knockout-round, the 2 losing players will play a 1 game playoff to decide final placement. Whoever is the higher (better) seeded player decides the game and order. Winner of that game finishes 5th, loser finishes 6th. Same after the semifinals, loser finishes 4th, winner finishes 3rd.
e. $5 normal fee for entry for these top 6 players, $20 to winner, $10 to runner up.
20. “B Division” Final
a) During Finals, a special league night will be occurring, only open to players not competing in the Top 6 Final, and in positions 7-18 in the standings for the B Division Final. Only players who have met the minimum participation requirement (2 meets) for the regular season will be eligible for either finals.
b) B Division finals will be a head to head match play bracket similar to A division, except the matches will be best of 3 games to keep things moving. All other rules from the A Division finals apply, except players choosing games may not wait for machines that are not available or on the 3rd ball of a game in progress.
c) These results will determine the final standings from 7th through 18th place in the standings. Tiebreakers will be based on original qualifying position. No tiebreaker games will be played for B Division.
d) Like a normal league night, the pot will still be $5 per person, and the payout scale will be the same as the regular 8-12 person scale. Those playing in the top 6 Final will not be eligible for this prize.
e) Since the B Division Finals is not a regular season league night it is not eligible to be used as a player’s drop score even if they attended all 5 regular season meets. Any player not participating in the B Division finals will be placed below all of those who did in the final standings, according to qualifying position.