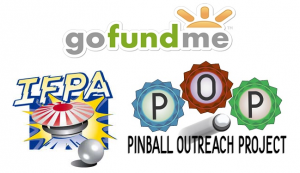 The International Flipper Pinball Association and Pinball Outreach Project are teaming up on a GoFundMe campaign to try and raise some funds for both the POP charity and the Women’s World Pinball Championship.

In 2016 the International Flipper Pinball Associated crowned the world’s first Women’s World Pinball Champion. Featuring the top 16 ranked women from around the world, we’re excited to announce that the 2nd annual championship has been scheduled for March 2017.

We’re reaching out to the community to try and help increase the prize money for the eventual Women’s World Pinball Champion. Currently the prize pool is made up solely of entry fees from the competitors resulting in a $400 prize to the winner. Our goal is to try and at least double that prize through this fundraiser.

We are teaming up with the Pinball Outreach Project who’s mission has been to improve the lives of children by sharing the history and excitement of the game of pinball.

POP has done this through:
– Bringing the game of pinball directly to children in hospitals, schools and community centers
– Making pinball accessible to children by offering a family friendly venue to play free pinball.
– Spreading awareness of our mission by hosting fundraisers and tournaments.

The money generated by this fundraiser will go a long way towards helping both organizations.

Our plan is a simple 50/50 fundraiser, so every dollar donated will go 50% to POP and 50% to the Women’s World Champion prize.

Let’s raise a bunch of money for POP and give our next Women’s World Champion a prize to be excited about!

10 responses to “Help raise money for IFPA and POP!”