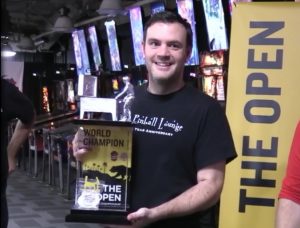 In the history of competitive pinball, very few (31 in fact) have had the chance to call themselves a Major Champion. Like professional golf or tennis, the opportunity to join this elite club only happens a handful of times every year. THE OPEN – IFPA World Championship brought together three finalists looking to add their name to this list (Colin Urban, Jared August and Eric Stone, who were all first time Major Finalists) and one finalist looking to add to their already established legacy (Andrei Massenkoff – 1-time Major Champion, 7-time Major Finalist).

In a clutch ball 3 come from behind victory on the final game of F-14 Tomcat, it was Eric Stone who became the latest player to be crowned World Champion, and the 32nd player in competitive pinball history to win a Major Championship.