CoinFlipper: new triumph for Acciari and pinball competition in Saint-Vincent 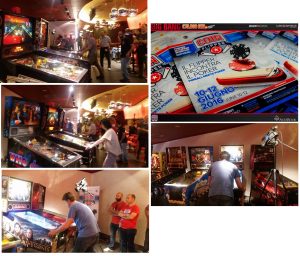 Saint-Vincent – Another success for Daniel Acciari and the Iinternational sports pinball. This the double result of CoinFlipper, the international tournament valid for the Ifpa ranking (WPPR) that took place during this weekend into the Casino and Resort in Saint-Vincent. Obviously, for pinball competitions the success is represented by the great success into the gaming room and in the world of poker, thanks to the combination of IFPA Italia and Pagano Events who organized the event, along with Tecnoplay and Sweetgames. Although there wasn’t a very high number of participants, there was a very high interest of poker players and casino visitors, with long queues of people behind each pinball machine in the free play area and at the end of the competition. Enough to convince the organizers to repeat the event next year too. In the same timey, for Acciari it is another victory, allowing him to get important points for the ranking, where it could get back into the first position.

He won after a clash of the titans, with the Italian number two and teammate in the national team, Roberto Pedroni, closing in second place. Third place for Giuseppe Violante and fourth place for Fabrizio Amiconi from Rome.

DIVISION B – Together with the champions division also the division B took place, where the venetian player Daniel Baldan triumphed, followed by Davide Delprato from Torino and by Matteo Filippin from the same region. Fourth place for Pablo Iacoponi from Pisa.

LET’S TALK THE CHAMPIONS – “I had to do this experience at least once in a lifetime and it was fantastic. Beautiful environment and a perfect flipper-poker connection. Both of them can be gambling and sports games, and the sports type we practice is the most beautiful of both games and it brings out all players’ skills”. In this way Daniele Acciari comments the victory just conquered at the CoinFlipper, the international tournament valid for the IFPA international ranking that took place during this weekend at the Saint-Vincent Resort & Casino.

“The tournament went very well. I found new people interested in the game and I explained them with pleasure all pinball machine world, also giving them some little lessons on the game, like to Luca Pagano, who is a great poker player, and he has approached this world for the affinities that pinball machine has with poker,” says the Italian champion again.

“As for the victory, it was deserved, but not for the way I played, but for my mind: I imemdiately established myself without uncertainties, as in previous tournaments, and jumped to the middle, and I’m pleased to having done it in front of many prominent people. I hope that after this big event and other ones scheduled the pinball machine is known and appreciated by many other people, in order to create a large community of people, like the one of the American world…immense” Acciari ends.

Pagano Events company, owned by Luca Pagano, the famous poker champion of PokerStars, organized the event, along with IFPA Italia. “The idea of CoinFlipper – Pagano explains – born from my passion for pinball machine, that I could deepen during my trips to Las Vegas during the WSOP. After the tournament I did not know what to do and I went to the Pinball Hall of Fame: 100 machines! I said to myself: ‘I must abaolutely arrange something in Italy’.

“We need skills both in poker and in pinball machine – Pagano still explains – but perhaps skill is more dominant in pinball machine. This is the beautiful and the bad of poker, where anyone can hope for, and even be able to beat the world champion. I think I have no chance in pinball machine. And another thing in common is the fun, which is the real driving force of Texas Hold’em”.

Pagano still reveals that, as soon as the curtain fell on the first edition of the tournament, is already thinking about the next one: “And they are also perfect opportunities to try different machines.” Acciari ends with a praise to the organization of the 2016 edition: “All right as rain. No problem. And this is a result too, taking into account that it was the first edition.”

The other good news for pinball world is that, given the great feedback received from this game, the Casino of Saint-Vincent has decided to install 5 pinball machines on a permanent basis into its floors, which will then be available for free-play all the year!

7 responses to “CoinFlipper: new triumph for Acciari and pinball competition in Saint-Vincent”