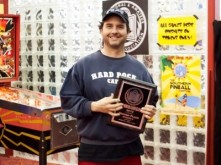 The IFPA is pleased to announce that our Player of the Year for 2018 is Trent Augenstein from Delaware, OH. Trent racked up an incredible 1578.18 WPPR points during 2018. This beats the previous record of points earned during a year of 1425.50 (also by Trent in 2017). Trent currently sits as the #6 ranked player in the world having held that spot from the start of the year.

The IFPA wishes to congratulate Trent on all of his success throughout 2018. The IFPA posts this with the caveat that there are still 71 sanctioned events left on the IFPA calendar, and it’s likely that Trent will play in most of them.

One response to “Trent Augenstein – IFPA’s 2018 Player of the Year!”