King of the Silverball – Pinball Expo is Back and Bigger Than Ever! 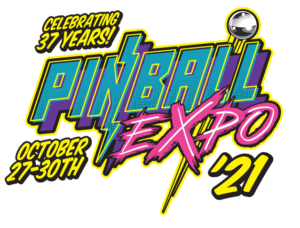 SCHAUMBURG, IL. – The longest running event of its kind in the world, Pinball Expo celebrates its 37th anniversary this coming October 27th through October 30th. Advanced planning is already indicating this will be the largest gathering in Pinball Expo’s history when the doors open at the Schaumburg Illinois Convention Center. Located in the northwest suburbs of Chicago, the new venue will provide more than 60,000 square feet of exhibit space for the pinball extravaganza, nearly tripling the amount of space required to host the event in recent years.

The Pinball Expo love fest started as a dream for Rob Berk, the show’s founder. As a young boy he was mesmerized by the pinball machine in the basement of his family home. These memories motivated Berk to begin buying his own machines after graduating from college and start a personal collection. Today that collection has grown to over 1200 machines, encompassing the full and ever evolving history of pinball.

His love of the games eventually led him to track down the creative and engineering geniuses responsible for actually designing and building the machines. His digging resulted in discovering some of the industry pioneers. And then came the thought; could he pay back the years of enjoyment by staging an event, inviting these pinball luminaries, and having people attend to celebrate all things pinball. It was a risk, but Berk felt it was worth the effort to try, if only for a single outing. In the age before the internet, a few modest newsletters and sporadic written correspondence by mail were all that linked the enthusiasts who largely pursued their hobby alone. Little could Berk have imagined the number of pinball fans around the world.

The outpouring of support for the first show resulted in the launch of what has become an annual celebration of pinball that attracts attendees from around the world for hours of casual play, tournaments, and seminars from leading designers, autograph sessions and a host of other attractions throughout all four days.

During its long run, Pinball Expo has also left its mark on the industry. For many attendees it was the first time they were able to meet like-minded enthusiasts and share their experiences. This led to innovations in the restoration of classic games including backglass and playfields to wiring and electronic upgrades. The show has also fueled interest in promoting those hobbyists who prefer new games, which now account for a significant portion of many of the current manufacturer’s sales.

Today, with the launch of the 37th annual Pinball Expo, Berk has kept the enthusiasm alive. While many of those early pinball pioneers have passed on, a new generation of designers and engineers have firmly established themselves as legends. And too, even with the internet and countless pinball groups active on social media, the show remains a yearly event through which enthusiasts can make new friends and learn more about the game they love.

Although last year’s virtual Pinball Expo was deemed a success, this year’s event is now poised to surpass all previous live outings. Pent up demand and abundance of exhibit space has resulted in the single largest expansion of exhibitors and pre-registered attendees in the show’s long history. As show founder Rob Berk noted, the generous room allotment in the Renaissance Schaumburg Convention Center Hotel has been fully booked for months with other local area hotels are stepping up to accommodate the overflow.

Although some credit for the fervor surrounding the upcoming show can be attributed to a desire by pinball enthusiasts to return to normal, some of the dramatic expansion is also by design with show organizers enlarging the scope of games included in the event. “From year to year we’ve always tried to expand and diversify the show,” Berk explained. “That has expanded our audience and given the attendees a better experience. This year we’re closing in on a hundred exhibits and included new types of games. We’ve always tried to diversify to make it interesting for everyone.” As Berk is quick to point out, this year’s event will also feature exhibits and sessions on classic hand-held games put out by companies such as Sega and Nintendo as well as classic coin-op games dating back to the Golden Age of Video Games. Also announced was an expanded Flip Out Tournament to include a women’s competition.

Berk also noted the increased interest in so-called “home brew” games. This niche section of the industry includes games built from scratch by dedicated hobbyists. At present time Berk expects more than 20 different home brew games to be on display. These unique and often one-of-a-kind games reflect the creativity of hobbyists from across the country who often spend years designing and building the machines.

“Pinball Expo is still ground zero for everything pinball no matter what level of interest you have, and whether you’re a hobbyist or a professional,” Berk said. That is to say, in addition to the many new elements, this year’s show will offer all of the popular features that have attracted pin enthusiasts from around the world over the decades. These perennial favorites include a factory tour of the world’s major pinball manufacturer, Stern Pinball. There are also autograph and selfie-sessions with legends of the game, and a wide range of seminars by some of the world’s foremost experts of the game and historians. Among the line-up of guests of honor at this year’s event will be Doc Mack, video game legend and owner of the Galloping Ghost Arcade (Brookfield, Ill.).

Show organizers have noted the challenges associated with launching such an event as the nation emerges from the COVID crisis. “We’ll be prepared for whatever we have to do when it comes to safety, including social distancing of the machines,” Berk said. “We will follow whatever local or state guidelines are provide, practice all the safety precautions, and insist attendees follow those guidelines.”