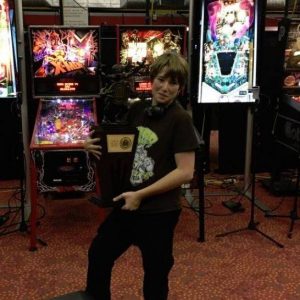 In the history of competitive pinball, very few (27 in fact) have had the chance to call themselves a Major Champion. Like professional golf or tennis, the opportunity to join this elite club only happens four times a year. The PAPA 20 World Championship brought together two finalists looking to add their name to this list (Escher Lefkoff and Trent Augenstein), with two players looking to add to their legacies. Bowen Kerins was looking to capture his 6th Major Championship, and Cayle George his 4th.

Following a tiebreaker with Bowen Kerins on Skateball, it was Escher Lefkoff who became the youngest player in competitive pinball history to ever win a Major Championship.

With his victory Escher earned himself 140.63 WPPR points, the 2nd most all-time for a single event, moving himself up from 79th to 38th in the world.