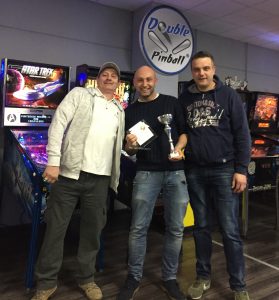 The Roman Daniele Acciari won the title of 2018 National Champion, triumphing in the Ics final: Fabio Francescato celebrates too.

All as forecast, or so, in Assago, just outside Milan (the location where will be Ifpa16 World Champ), where the highly decorated champion of sports pinball, Daniele Acciari, won the 2018 National Champion title, winning the Final Match of the Ics Circuit (Italian Championship Series), which took place during the weekend in the
Double Pinball showroom. The Roman, as predicted, has beaten the other fifteen finalists from the very beginning, up to the decisive challenge against Fabio Francescato, from Pavia, at the second place. Third place for Daniele Baldan from Veneto, who put behind him the Italian number two Roberto Pedroni, despite the fact that the player
from Brianza was one of the favorites for the title on the eve of the final, after ending the qualifications circuit at the first place. But Francescato was a real protagonist of this weekend of challenges, who in addition to obtaning the second place at the Ics, also won the other Double Pinball’s torunament: the Double PinGolf Battle. The
player defeated Pedroni in the final, ending at the second place, before Danny Iuliano and, again, Daniele Baldan, who ends at the fourth place. This was also a significant result, considering that this tournament represented the first stage of the 2019 Ics National Circuit, which also this year offers seven qualifying rounds during the full season. And this year too, we may have a little fun. However, the name of the finalist will be decided with the final 2018
Ics, who earns a place at the final 2018 Ecs of Fulda, in Germany, which is added to the list of the other four Italians already in the contest. This is Danny Iuliano, who will then make his debut in Europe, thanks to the surrender of Daniele Acciari (who already had access right beyond the Ics result) and other predecessors.