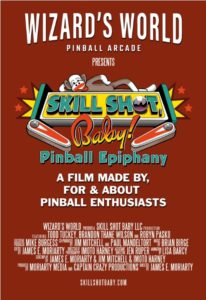 The producers of “Skill Shot, BABY! Pinball Epiphany,” a short movie made by, for and about pinball enthusiasts, are thrilled to announce that they will be joining forces with Wizard’s World Arcade and its owner Mike Burgess to start work on the pinball movie fans of the game have always wanted to see. Mike has generously agreed to take on the role of Executive Producer of the “SSB: Pinball Epiphany” short film. Mike and the other producers will be working hard over the next several months to get the movie made to exceed expectations, and to get it into the hands of the pinball community for its public premiere on November 5.

Asked what he thinks of this venture with the producers of “SSB: Pinball Epiphany,” Mike Burgess says “It’s a great group of people. They all love pinball, we ALL love pinball. It’s going to be a great success!”

Director James Moriarty joins Mike in his enthusiasm: “The film just got real, and so the real work begins. All the actors have been cast, the location has been secured, and the crew members are being hired. Filming will take place in September. The public premiere will be November 5 at the Carmel Film Forum in Carmel, Indiana.” [link to film forum www.fortwaynepinball.com and www.facebook.com/fwapinball

Mike and the other producers are excited about how their teamwork can grow and enhance the short film, allowing the producers to assemble an “A Team” of professional movie technicians to ensure every aspect of the short film exceeds expectations. Director James Moriarty and Director of Photography Imoto Harney will be in charge of this expert team that has been made possible by Wizard’s World’s involvement, as well as the generosity of over 100 Kickstarter backers whose pledges have helped make this film a reality.

“Skill Shot, BABY! Pinball Epiphany” is a short film that presents a key scene from the planned full-length feature screenplay “Skill Shot, BABY!”. The short film will introduce the characters, themes, and look and feel of the full-length feature, as well as demonstrating the competencies of the production team, cast and crew, to the pinball community and the wider world of movie fans and investors.

Visit www.skillshotbaby.com for all the latest news and production updates on the film project.