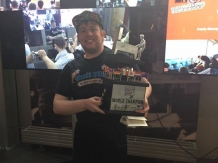 The IFPA is proud to announce that Raymond Davidson has finished at #1 on the World Pinball Player Rankings, thus earning IFPA’s top honor as the 2021 “World’s Greatest Pinball Player”. No single tournament victory will ever secure this title for a given year. Only consistent play at the highest level over the course of multiple years leads to players reaching the pinnacle of the World Pinball Player Rankings. This is the 3rd time that Raymond has been crowned the World’s Greatest Pinball Player and one of five players in history to receive this award (Keith Elwin (7), Jorian Engelbrektsson (3), Zach Sharpe (2) and Johannes Ostermeier (1) being the other four).

While the 2021 season ended up being only 5 months long, Raymond was still able to play in 21 IFPA sanctioned events during this season, with 11 of those events hitting his top 20 IFPA resume. His greatest achievement of 2021 was his 1st place finish at the D82 Pinball Super Series Event 6: 2 Bank MatchPlay, earning him 70.52 WPPR points. Overall, Raymond won 33% of the 21 events he played in, while placing in the top 4 at 62% of his 2021 events, a truly remarkable achievement.

Congratulations to Raymond, and best of luck to everyone on the upcoming 2022 season in the race for #1. Raymond will receive his WGPP trophy at the IFPA17 World Pinball Championship in Florida in May.