Julio Vicario Soriano – IFPA’s Player of the Month for November 2016! 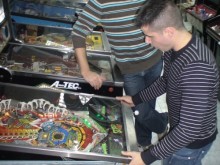 The IFPA is pleased to announce that our Player of the Month for November 2016 is 2-time Major finalist Julio Vicario Soriano from Spain. Julio earned a total of 178.45 WPPR points in November. This included the following results:

Julio is currently sitting in 4th place in the 2016-17 ECS standings.

The rest of the top 5 for the month of November included Greg Poverelli from New York with 134.10 WPPR points, Steven Bowden from Franklin Township, NJ with 130.58 WPPR points, Kevin Birrell from Seattle, WA with 122.09 WPPR points, and Daniele Acciari from Italy with 120.40 WPPR points.

Congratulations to Julio and the other top WPPR point earners of the month!